The History of our Theatre 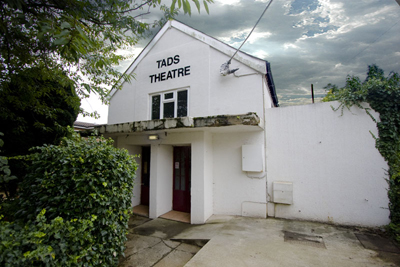 A Primitive Methodist society is recorded in Toddington from 1843 when it appears in the records of the Luton Primitive Circuit. The first Primitive Methodist chapel was built in Duck Lane (later renamed Gas Street and now Conger Lane) in 1846 and was registered by Samuel Wells, a trustee, in 1854.

The 1882 map also shows the Primitive Methodist Chapel occupying the site of Toddington’s first cinema in Duck Lane. In 1893 a new chapel was built in Leighton Road. The old chapel became known as the Industrial Hall and the building was used by the Toddington Gas Works for storage. Arthur Neale was secretary of the Works. When his daughter Ella decided to form the first Toddington Girl Guides in 1914 she was able to use the hall as a Guide Hall. Incidentally this was the sixth group to be formed in Bedfordshire, with Toddington being the first place outside Bedford.

George Hart had the idea of opening a cinema. His wife Ella Neale suggested the Guide Hall as a venue. Not many places the size of Toddington could boast its own cinema.  It opened in September 1925 and was named the Picturedrome (later renamed the Cozy and again the Rex). George opened the cinema two nights a week. He could often be seen dashing across the green, after closing the newsagent’s shop, in order to open the Picturedrome on time. A giant billboard on the newsagent’s wall advertised the film that was showing. Advertisements in the Luton News were rare. In those early days the films were silent and a tin tray used to be rattled to create the sound of thunder. There was seating for approximately 140 in the stalls and a small balcony. If the cinema was full you were allowed to stand at the back. It soon changed its name to the Cozy.

When George moved to Crowthorne in 1930 he sold the cinema to a Mr Morgan. Early proprietors were JHW Marsden and Eddie Gore. Frank Bryant was “headhunted” by Eddie to take over the cinema in Arlesey, which lasted a short time before he was asked to take over the Toddington cinema in August 1938. After the outbreak of war in September 1939 it transpired that Eddie was a fascist supporter and was interned. Frank’s father William took over as manager whilst Frank went to work at Electrolux in Luton as an electrician where he continued to work until his retirement in 1980.

By 1940 the cinema was owned by the Touring Talkie Picture Company and there were once nightly shows using Imperial Sound Equipment. Cinema tickets were sold from the box office by Barbara Bryant. The stage was 18 feet deep and with a width of 18 feet had one dressing room. Occasional live performers such as local resident Connie Russell used to tap dance on the stage. After the Second World War, it was known as the Toddington Cinema before becoming known as the Rex under the ownership of the small Midland and General Circuit which owned four cinemas.

John Bryant recalls that his father and uncle said that the cinema was open six nights a week showing two films.  This was done by swapping films mid week with Arlesey Cinema.  The handover took place on the road between Clophill and Beadlow Manor at a small unused road with a couple of stone gateposts. This is where the cinema managers used to meet to change over films!

The public were very patient as the old equipment often broke down .There was a lot of stamping of feet and shouting "oh no not again".  A great cheer went up when the film restarted.  Quite often bits of the film got missed when the reels were changed but nobody seemed to mind. The cinema or "the flea pit" as it was called by the youngsters, was somewhere to go, particularly in the winter especially for courting couples. Children always apparently had to go in with adults irrespective of the film and often they would wait outside for an adult to take them in.  They were sent to the front whilst the courting couple went to the back!

The toilets and sewers were replaced in 1952 and at the same time more compact projection equipment gave a better working space in the projection room. A stationery engine supplied the power, when it was not breaking down! Safety aspects about the building caused concern and it remained unlicensed for a time. It reopened in January 1954 only to close in October 1958 when Les Bryant was manager.

It was then sold and converted into a village hall by St George’s Parish Church. It opened on 23 April 1960.

The building was bought by the Toddington Amateur Dramatic Society (later TADS Theatre Group) in 1993. The irony is that Frank Bryant, the former cinema manager, was a founder member of Tads!

Beryl Hyde recalled her memories of the Cozy in the 1940s as follows:

Saturday afternoons were great because for 4d we kids could sit in the front rows. The only trouble was that the din we made and the shouts and the whistles made it almost impossible to hear the film.

The grown-ups would get angry and shout back to us and it was much as Mr Bryant, the old gentleman who ran it, could do to control us all. Upstairs were more seats, the only place I have ever known to have double seats for courting couples. I remember, as a teenager, sitting in one of these double seats, watching a thriller and feeling very grown up, only to find that the last reel of film hadn’t arrived. We all had to sit and wait for the bus that was bringing it to come in from Luton before we could see the end of the film and “Who done it?”